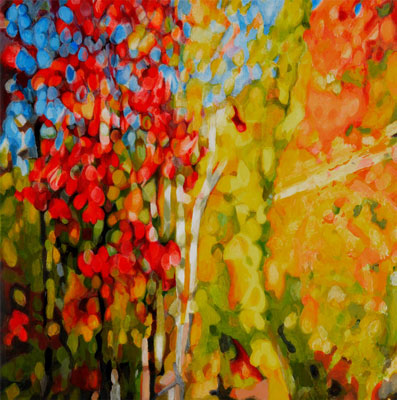 In my work I am interested in how a single world and consequently a single work of art could be colliding within itself.
I find interesting the dichotomy that divides a thing into two equal and contradictory parts. Writers often use this technique for creating conflicts within a single character, good and evil, real and imaginary, male and female, primitive or civilized.
The borders seem clean cut for science, we are dead with no pulse or alive and breathing. However, religion states the body’s functions stop but the soul might continue on.
Common sense tells us when something is light or dark, yet this perception is influenced by the environment in which we observe it.
I am interested when our perception seems to be failing us.
Visual art has stemmed from a discordant figure-ground relationship that puts two planes, foreground and background, in a tense and contradictory juxtaposition, perspective illusion or chromatic tension.
Perceptual multistability, switching between two or more interpretations of an image under continuous viewing, can be evoked by visual patterns that are too ambiguous for the human visual system to recognize with one unique interpretation.
I am interested in that intrinsic duality: two dimensional versus three dimensional, realism versus abstraction, foreground versus background, receding versus forwarding, attraction versus repulsion.
I am looking for a surface tension maximized to the point at which an actual pulsation or flickering is perceived by the human eye.
I am less interested by a painting as an object than as a generator of perceptual responses.